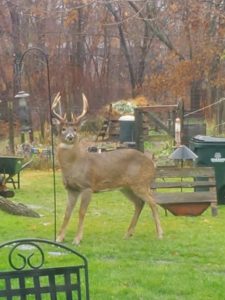 My dad just sent a picture of a majestic buck standing in the yard of my childhood home, with my parents’ dormant vegetable garden in the background. Right now, with the blog and the book ever-present in my mind, I was reminded of my first ever attempt at writing an essay for Superman and God, one that arose from an advocatus diaboli argument Jon and I were having one Sunday morning at the IU library. I titled it rather ostentatiously, “On the Genealogy of the Morals of Deer Hunting” (Don’t judge – I was reading a lot of Nietzsche in those days). I thought at the time that the essay, which chronicled the fraught relationship my upbringing caused me to have with the ethics of hunting and eating meat, was quite charming, but now I’m not sure it will end up being anything more than what in German is aptly called Schubladenliteratur (writing that is destined to remain in one’s drawer). It does, however, give me a baseline for pondering the evolution of my vegetarianism.

I’ve been a vegetarian for 14 years. My “vegiversary” is actually on November 24th, which was the day after Thanksgiving in 2006 (I had to have turkey one last time!) When most people find that out, there’s a series of questions and comments I’ve come to expect. Of course, as Jon points out in his “Identity Crises” article, the remarks from my interlocutors and the depth of my responses vary depending on the context and my relationship with the person, but there are some common tropes, including:

Why am I a vegetarian? How much time do you have? The anecdote I like to tell, because it’s punchy and makes me sound far more impulsive than I actually am, is that I was arguing with someone about deer hunting in 2006 – I didn’t want them to go – and in response to, “What’s your problem with this? You eat meat!” I said, “Fine, then I won’t anymore!” And that was that.

The real roots are naturally far more complicated. When I was growing up, the lush, productive garden my parents cultivated was under a constant onslaught from pests. We had to get somewhat…aggressive…in our defense of the produce. In addition to fruits and vegetables, we raised rabbits, and my feelings about eating the meat I had once known as a tiny, fluffy bunny I could hold in the palm of my hand changed over the years until I finally couldn’t bring myself to do it anymore.

In addition to the influences of childhood, I had several formative experiences in young adulthood which were really the rising tide behind the seemingly spontaneous dam break in 2006. Driving back to Iowa to see my parents and extended family, I often passed vast, muddy, smelly feedlots. The cattle and hogs looked abjectly miserable. One weekend, I went up to Chicago to see my college roommate’s sister (Hi, Beth!) perform in a stage play about factory farming. (Looking back, I sure knew how to let my hair down and take a lighthearted break from writing my dissertation on anti-fascist exile literature.) Somewhere along the way, an idea lodged in the back of my brain and began to take root. I won’t say that it was inevitable that I would become a vegetarian, but rather than being the direct cause of my lifestyle change as I so often glibly portray it, the argument over deer hunting acted more like a catalyst.

After I made the apparently snap decision to go meat-free, I began to identify my values, which include environmental conservation, easing the suffering of others, and staying healthy in mind and body. I started to examine how the new facet of my lifestyle fit with those values, and I found that it did very well. Through my research, I feel gratified by what I’ve discovered regarding the benefits for the environment, animal welfare, and my health. To return to the question of whether I try to “convert” meat eaters to vegetarianism, I don’t judge and I don’t proselytize, but I am always happy to help educate.

Normally, the German in me doesn’t much care for small talk, but honestly, this is one topic I never mind getting grilled on. One thing I’ve learned recently while doing research on values-based decision making for Superman and God, is that, while this approach to making choices has many positives, it can also lead us to view the world too narrowly, to become resistant to change, to be too vulnerable to confirmation bias. That litany of questions and surprised reactions I almost inevitably hear from strangers and new acquaintances when they learn about my dietary choices gives me a welcome opportunity to examine my motivations. I’ve come to realize that this issue, along with a select few others, is a crucible for my value set, and that vow I took in November 2006 was an inflection point in my life path.

Now, in answer to the age-old question of what I will have for Thanksgiving dinner instead of turkey: nothing! The sides and the pie are the best parts anyway.