For me, romantic comedies set at Christmas are like chocolate pecan pie – treacly and high fructose. I wouldn’t want more than a couple pieces a year, and when someone asks me what my favorite kind of pie is, I never say chocolate pecan1, but I usually think about it. You know what you’re going to get, and you know how you’re going to feel afterwards.

The demographic for the Hallmark Channel is women between the ages of 25 and 54. I would hazard a guess that the bulk of viewers are more specifically white, heteronormative, middle-class Christian women. This is not to say that others don’t watch this type of movie, but this group seems to be the primary market target, not least because diversity within the casts is virtually non-existent. In terms of my friends and family members who will admit to watching Hallmark Christmas movies, this seems at least anecdotally to hold up as well.

As D.L. Mayfield remarks in her insightful article, "I Watched the Top 10 Hallmark Christmas so You Don’t Have To," 2019 marks the 10-year anniversary of the Hallmark Channel’s "Countdown to Christmas," a 24/7 block of seasonal movies that begins in late October and runs through New Year’s Day. It has changed the landscape of holiday programming — spawning copycats and flooding other channels with movies that are all easily watchable, intensely forgettable and laughably similar." These movies are immensely and enduringly popular, despite – or perhaps precisely because of – their cookie cutter nature.

The plot arc development of these movies follows the U-shaped model of comedy film structure described by Northrop Frye, which was based on Aristotle’s analysis of Greek drama structure. "This U-shaped pattern…recurs in literature as the standard shape of comedy, where a series of misfortunes and misunderstandings brings the action to a threateningly low point, after which some fortunate twist in the plot sends the conclusion up to a happy ending."2 The more specific conventions of the subgenre typically dictate that the female lead be a career woman from a big city, that the film is set in the country or a small town, that the prospective couple dislike each other at first, and gradually grow romantically interested in one another before having a falling out that threatens to break them up for good. Then, through the magic of Christmas, they reconcile, and the movie ends with a kiss or even a proposal or wedding. The other plot points, the supporting cast, and the sundry trappings are so predictable that it is almost too easy to make a game out of it. 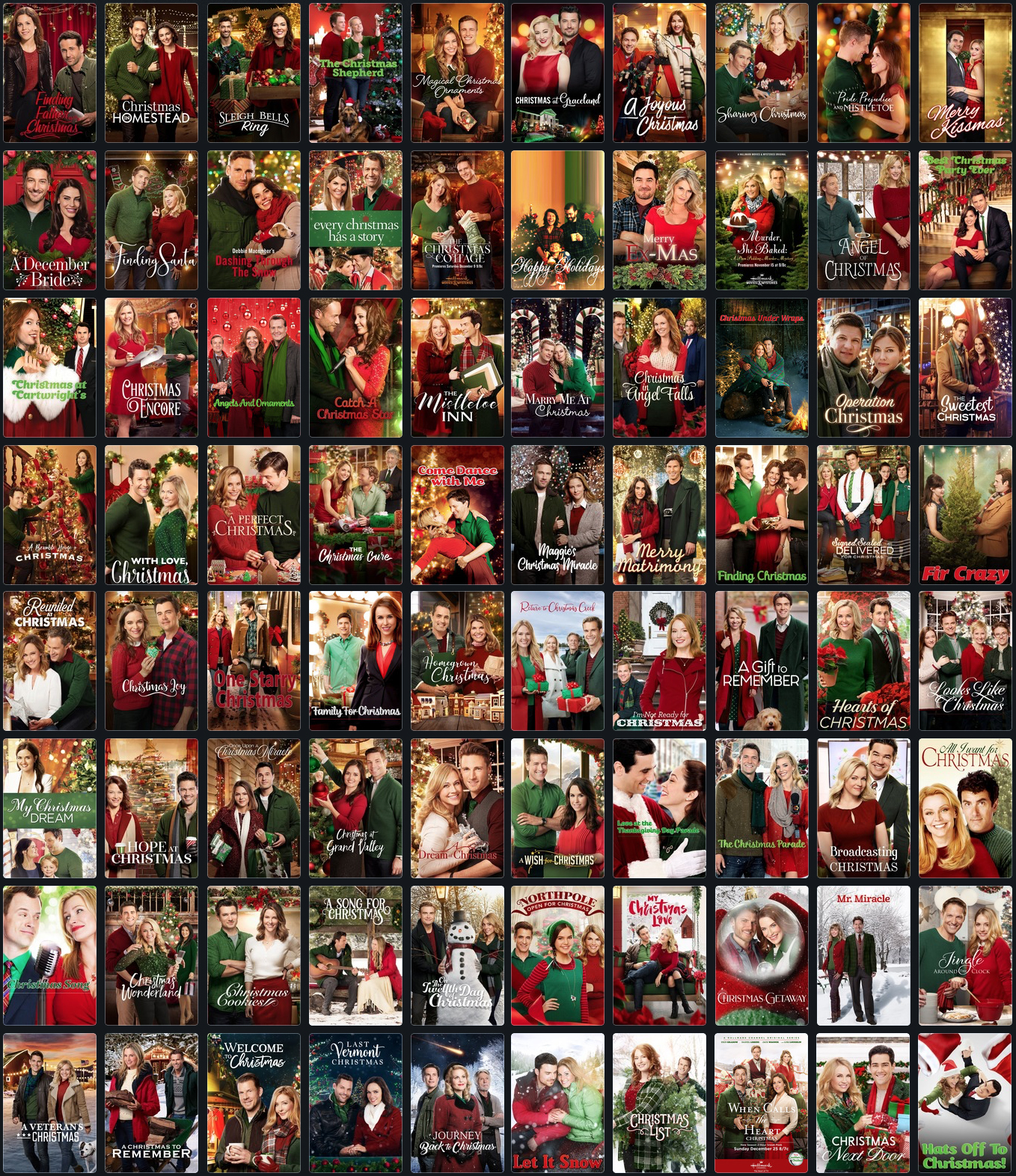 The sameness of the plots, casts, and aesthetics of these films strikes the discerning viewer as problematic at best, if not downright insidious. In her article "How Hallmark Takes Over Your TV Every Christmas," Emily VanDerWerff points out, "Hallmark doesn’t air religious programming, but its roots as a religious network, combined with its family-friendly standard, have yielded an M.O. that is very, very traditionalist." She goes on to write: "Hallmark specializes in movies about single women who find love at Christmas, or families who reunite at Christmas, or families of single women who reunite and find love at Christmas. The characters in these movies tend to be white, and a lot of the movies conclude with a career woman giving up her life’s work for love. If you’re of a progressive political bent, it’s easy to feel vaguely discomfited by all of it." While many other genres in television have moved in recent years to keep up with changing societal norms, this subgenre of romantic comedy has remained firmly rooted in an idealized version of the past, when women were expected to settle down near family, get married, and aspire to nothing more than handing down traditions to the next generation. Why is the genre so fossilized and why do tens of millions of viewers continue to tune into the Hallmark Channel every winter for their yearly dose of saccharine regressiveness?

French film theorist Christian Metz described the development of film genres as occurring in four distinct phases - primitive, classical, revisionist and parodic. I would argue that the subgenre of the Hallmark-style Christmas rom com is relatively unique in that it progressed more or less immediately into the classical stage and has refused to budge ever since. Virtually every other genre, from Disney fairy tale films to horror flicks to musicals, have long since moved to keep up with changing values and tastes.

As Hallmark’s competitors start trying to grab portions of the market share with their own versions of the romantic comedy set at Christmas, we are finally starting to see examples of movies that begin to reach into the revisionist phase. As Mayfield points out: "Hallmark is known for holiday trinkets, which is as superficial as it sounds, and has resulted in the company lagging far behind competitors when it comes to diversity. Their "branded experience" is one of relentless cheer and caters to people who find anything outside dominant cultural norms frightening or upsetting." In other words, what the happy ending looks like is indicative of what’s thought to be desirable/aspirational for women in the genre’s demographic, and from the point of view of the company - and by extension the advertisers - economic concerns drive content decisions.

I, for one, am interested to see what truly revisionist Christmas rom coms will look like, and I think the time is nigh. A couple weeks ago, when one of my friends and I were looking for something light and escapist for a virtual watch party, we landed on The Christmas Contract (Monika Mitchell, 2018), a film we ended up genuinely enjoying quite a bit. To my mind, this is a great example of a movie that is between stages but reaching into the revisionist stage. For one thing, it’s self-aware and self-referential in a way that both examines and pokes fun at the genre, beginning to subvert it yet still remaining more or less within the traditional parameters and following the comedy plot structure described above. There is an element of gender role reversal in that the male lead is the one who is brought from the big city and cajoled into taking part in the local Christmas traditions. He is also reluctantly ghostwriting a romance novel, for which he has been given a literal checklist in lieu of a unique plot description. Furthermore, the happy ending provides another model for a romantic relationship. Instead of a Prince Charming who whisks the protagonist away from her problematic life at the end, we see a relationship of equals who support each other both personally and professionally. They will go back to their regular lives and careers in the city, but they will be enhanced because of the mutual support. The male lead is an active listener who actually respects the protagonist’s needs and wants, and the latter sets and maintains healthy boundaries, not losing sight of her goals in pursuit of the relationship. I can get behind these signs of progress as they give me the predictable fix but without the usually accompanying sugar crash that comes after.

If we agree that the Hallmark-style Christmas rom com is inching its way into the next phase, this also begs the question – what would a fully revisionist or even a parody version of the genre look like? Frankly, I thought I might get a chance to find out when I watched A New York Christmas Wedding
(Otoja Abit, 2020) a couple weeks ago on Netflix. As you will see in next week’s Christmas special post, however, this was decidedly not the case.

Incidentally, if you want to find out who of your friends and loved ones watch this type of movie, see if they understand this social media post, which reverses most of the tropes like a photographic negative. Everyone else will be utterly baffled! 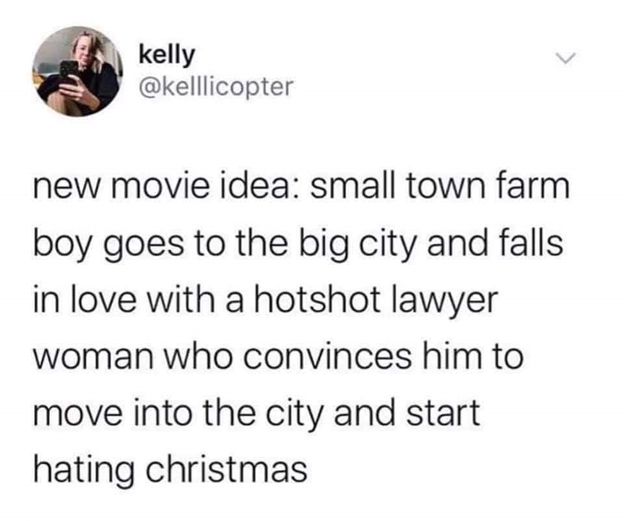 1This, by the way, is an example of a great small talk question in my book!