In December, we presented a weekly series of 10 cocktail suggestions for the holiday season. In the spirit of rejuvenation, we've decided to participate in Dry January. People may choose not to drink for a variety of reasons. Maybe they're permanently sober, maybe they're just taking some time to detox a little, or maybe they just don't want to drink every night of the week. Whatever your reasons, it doesn't mean that you can't enjoy something fancy or festive, and so we want to continue to introduce you to some fun and thematic drinks in the form of alcohol-free mocktails named after some of our favorite kid heroes.

Because we've firmly established the blog over the last two months, we will be turning more of our attention back to the book, so we will only present one mocktail recipe a week, and it will be featured in the context of "what we're drinking" at our weekly meetings, followed by a summary of "what we're thinking," where we share some related thoughts to the book sections we’re currently drafting.

And so, without further ado, we present Mocktail #1…

What We're Drinking: The Kid Flash

Several characters, including Wally West and Bart Allen, have taken on the mantle of Kid Flash, although Wally West also later just became "The Flash" after Barry Allen, who is probably the most well-known alter ego to readers familiar with the character. Presented in a variety of ways, one of his most famous current iterations is in the form of Barry Allen's brother-in-law through Barry's wife, Iris West-Allen: 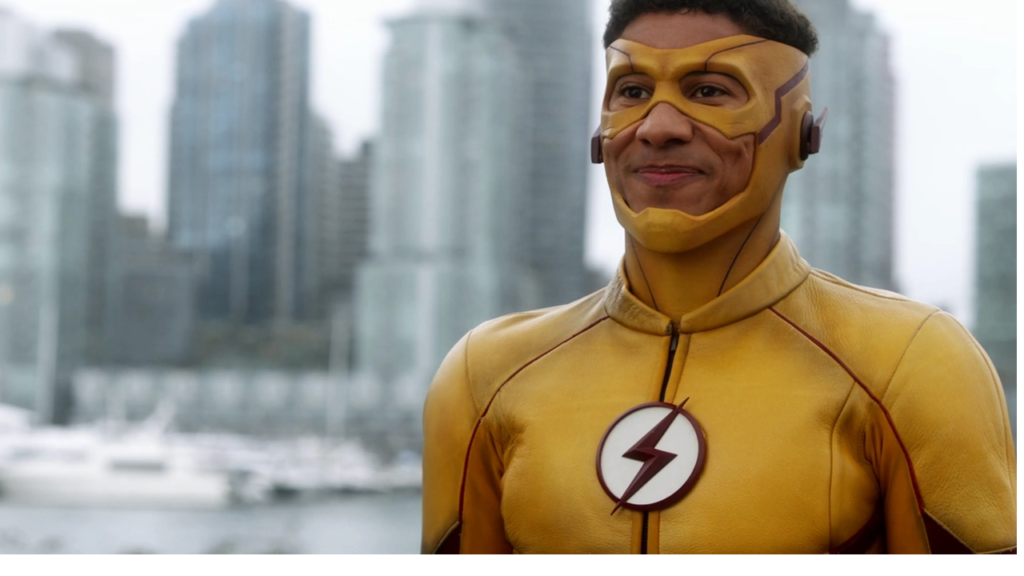 As you can see, Wally's suit is typically a combination of Red and Yellow, whereas the Flash has a primarily red costume. With this in mind, we decided that a fun mocktail to name after him would be something that's quick to make, requires yellow and red ingredients, and when ready, results in a red drink (maybe with a yellow garnish if you keep the lemon).

Maraschino cherries (and a little of the juice if you like)
Lemon wedge and/or juice
Agave or a simple syrup of your choice.
Tonic Water

Shake everything but the tonic water vigorously over ice, possibly with a small amount of water to help stir things up if the ice melting doesn't suffice. Pour the tonic water into the shaker and then lightly swirl it around, but don't shake it much, or it'll just fizz over. Strain into a glass and enjoy!

This drink was pleasant. It's sweet, of course, because it involves both cherry juice and a simple syrup. However, the tonic water gives a nice hint of bitterness, and the sour from the lemon helps offset the otherwise pungent sweetness of the sugary ingredients. Shaken particularly well, it honestly comes off as a subtly bitter-sour slushy, kind of like the ones Jon used to buy at lunch in elementary school.

What we're thinking: Why wouldn't someone want to travel in time?

The Colorado Springs Independent newspaper runs a weekly reader poll, and Rachel was struck by last week’s topic: What would you want to see if you could travel in time? (Poll results published January 7, 2021) Readers were given four options from which to choose:

While the alien encounter, which would presumably involve traveling into the future (?), is by far the most popular selection, it's interesting that over a fifth of the people polled wouldn't want to travel in time. We found that surprising, because should the opportunity arise, we here at Superman and God would leap at the chance (in a single bound!) That led us to ponder what reasons one might have for rejecting the notion out of hand.

What would be the potential drawbacks? If you were able to travel to the past, you might change something and disrupt your present/future for the worse. You might, for example, cause yourself to lose something important to you, such as a loved one. It is especially interesting to note that you run the risk not only of changing your own fate (in the film About Time, for instance, the protagonist’s his daughter becomes a son when he alters something in a relative’s past), but also you might change someone else's, and they wouldn't even know it (In the TV series The Flash, Barry Allen changes the past such that a friend's1 daughter becomes a son, but the father himself is unaware of it. Barry feels the need to tell him when he confesses having changed things.) This raises but one of many ethical considerations related to time travel that people might just not want to deal with.

One might think that traveling to the future could be somehow less fraught with danger: you're not meddling with a past that dictates what the world you know is to become. However, this doesn't mean that there aren't safety risks and concerns related to potential paradoxes. Not only may a distant future be dangerous in the sense that it is wildly unfamiliar and impossible to research prior to visiting, but there is also the risk of learning about a future that you are then inclined to prevent, possibly creating a paradox. It's easy to assume that travel to the past is different in this way; however, a visit to the future presents the same concern.2 If you see a future and then come back to the present and try to change it, how can that future have ever existed in the first place?

Aside from the paradox risks involved, both directions of travel present some more immediate practical concerns as well: Is the method of travel safe? Could you be injured, exposed to dangerous radiation, or even disintegrated?3 Moreover, if you do successfully complete the trip, what more commonplace dangers might you face when you reach your destination? Could you be arrested, attacked, injured, or otherwise harmed as a result of your ignorance or unfamiliarity?

The question of bodily harm upon arrival assumes, of course, that you're even physically traveling, and not just transferring your consciousness into your own or another body at a different point in time, like in Quantum Leap or About Time. Furthermore, it’s interesting that the time travel stories that involve “quantum leaping” into your own body are almost exclusively about traveling back in time and not forward. It’s almost as if you have to jump back into a memory and can’t jump into a consciousness that you haven’t experienced yet. One notable exception that comes to mind is the last episode of Star Trek: The Next Generation ("All Good Things"), in which Picard finds himself frustratingly4 jumping between past, present and future versions of himself to address the same existential threat: a spatial anomaly caused in the future that grows larger in the past until it will destroy all of existence at the dawn of time. Can you think of any other good examples of travel to the future in this way?

As an aside, whether we're dealing with travel to the future or to the past, analyzing the risk requires addressing real-world dangers, as well as assessing whether we're dealing with a fixed or a dynamic timeline, or even moving between (or creating!) alternate universes. These various paradigms of time travel depiction comprise an issue we often address in our book Superman and God.

We started our discussion of the CS Indy poll incredulous as to why anyone would refuse the chance to time travel, but upon further contemplation, we have reached a better understanding of the reasonable nature of their hesitation. When new forms of transportation are introduced, people are often fearful. For example, some people were afraid to step into the first airplanes when they were commercialized, and we all know what happened to the Titanic and the Hindenburg. It's not so surprisingly after all that most people would approach time travel with caution, and that some might not want to do it at all.

As for us? We can't wait to try ours out:

1John Diggle, who is assigned as Oliver Queen's bodyguard in Arrow when he returns from the island, and who quickly becomes his confidant, as well as a friend to the larger group of heroes in the "Arrowverse".

2Paradoxes go both ways. (So does time, according to modern physics. We just go "forward" in it because of a decrease in entropy.)

3Is the version of you that appears still you, or just a copy of you? We might ask the same question about the transporters in Star Trek.

4The experience is additionally traumatic for Picard in the sense that it causes a form of senility or mental illness (or at least presents as one) in his future self in the form of a fictional ailment called 'Irumodic Syndrome'.