"I don't care if anybody reads it."

- Rachel, about the blog, taken completely out of context.

The purpose of the blog was meant to be to help us develop our co-writing style, gather our thoughts, and vent some of our tangential creativity. The primary purpose was not to entertain or to gain a huge following, although we figured those would be positive side benefits if achieved. We needed to find out that we could be engaging and that we could develop a voice together that's a “Superman and God” voice. A more fitting quote may be...

“Don't run behind success. Run behind something called excellence. Eventually, success will come running behind you."

(Various versions of this quote have been attributed to everyone from Oprah to an Indian film 3 Idiots, which indicates to us the universality of the sentiment.)

When we started to work on this blog, we quickly found ourselves writing a lot more in a much shorter amount of time than we had been able to when we were focusing on the daunting task of authoring an entire book, and we were pleased with the quality. However, it wasn't long before Rachel had to virtually pull Jon aside and remind him that the primary purpose of the blog was to augment our book-writing experience, not just to spill our random thoughts into the ether. She related the story of how she set up an Etsy store for her knitting one time, and while she had many sales and great reviews, it didn’t take long for her to realize that monetizing the creative hobby gradually sucked the intrinsic joy out of the activity. We agreed that we enjoy maintaining this blog, but the fun we have writing for it shouldn't overshadow our original purpose.

And so, as we move away from a couple of months of cocktails followed by mocktails and embark on a productive writing season, we want to leave you with one more mocktail recipe and some general updates.

What We Were Thinking:

One of many topics we have discussed in recent weeks is the Bechdel Test, which requires more than one woman (in a named role), those women speaking to each other, and their discussions not revolving exclusively around men. When we were looking for some way to weave that into one last mocktail recipe in honor of a child character, Star Trek: The Next Generation came up as a good candidate: with numerous female characters in a variety of non-romantic and even authoritative roles, it certainly passes the Bechdel Test. To be sure, there are plenty of stereotypical romantic injections: Picard and Crusher's friendship is definitely not devoid of romantic tension, and Riker and Worf compete for Troy's attention. However, the show is certainly progressive in both the politics that it writes into the plot as well as the making of the show itself. And so, in honor of a groundbreaking series and our final attempt to give a nod to our favorite underage characters in comics and sci-fi, we present...

What We Were Drinking: The Virgin Alexander 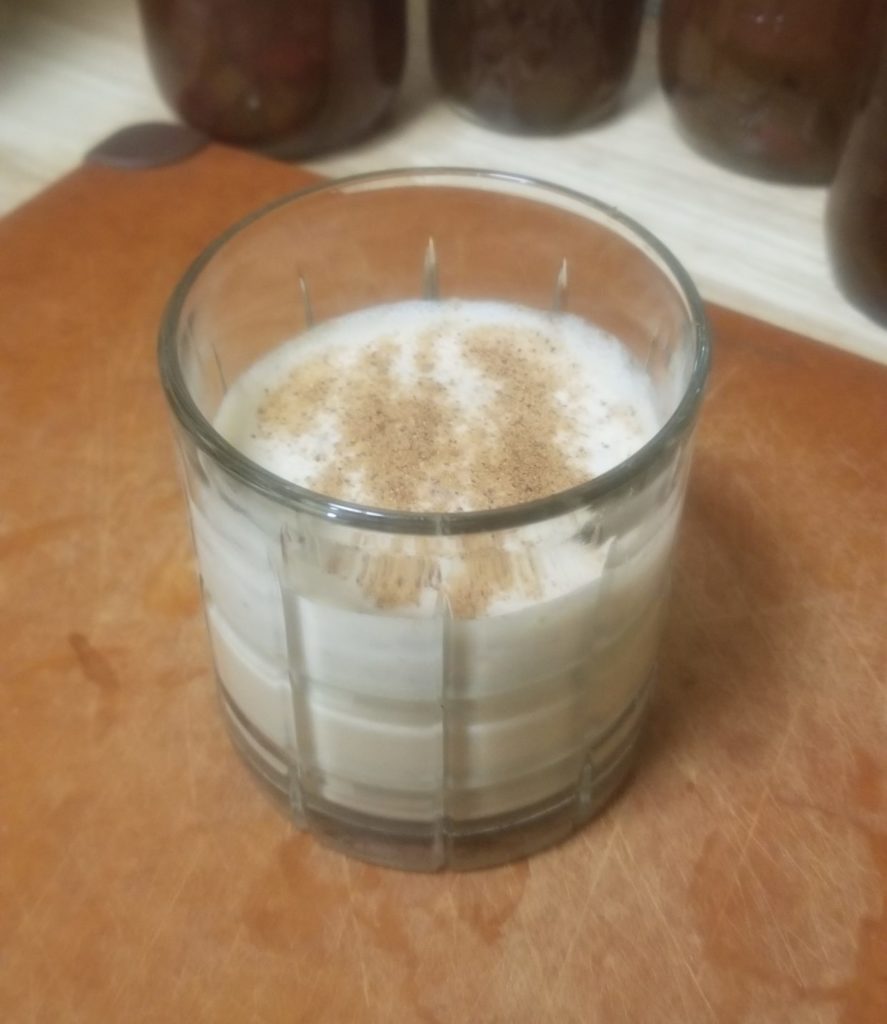 We tried to develop a variation of the Brandy Alexander, but to be honest, it went pretty off the rails pretty quickly. That's not to say it wasn't delicious! It's just a stark deviation from the underlying inspiration. But hey, it's vegan! (Jon had leftover coconut whipped cream from making some drinks for a vegan friend a night or two prior.)

Mix everything but the nutmeg in a shaker over ice.
Shake the absolute shit out of it.
Sprinkle a little nutmeg over it if you like that kind of thing.