Disclaimer: We have no affiliation with the products that we're talking about, and we take no responsibility for quality, enjoyment or fulfillment of orders placed. 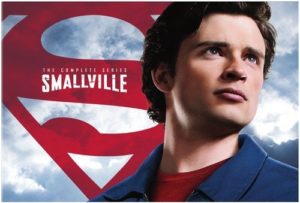 Got a friend who loves Superman but somehow completely missed the first decade of this century? Got a couple hundred dollars to spend on a gift for them? Then woo doggie are you in luck, because Amazon will sell you this boxed set of Smallville: The Complete Series for just shy of $300! Even better than a blast from the recent past? A format from the recent past!

You might be asking yourself: "jeez, why such a specific gift idea?" Great question! Well it just so happens that Jon and Rachel kind of became friends over Superman! Remember this post? That's right,  almost two decades ago, around the same time that Smallville debuted (debewed? debued? debutted? debuteé), Jon arrived in Bloomington for grad school and got the next best thing to a career in Germanic Linguistics: an awesome new friend!

But seriously, Smallville was a really interesting take on Superman. It showed us how one might imagine Superman to grow up into the man he did, with the values that he had, and the relationships and perspectives that make him the hero we know in the comics today. It was an interesting mix of clever introductions of well-known supporting characters, heroes and villains, and epic re-imaginings of his origins and the conflicts that he did and would face as he tried to reconcile his extraterrestrial origin with his earthly upbringing.

← PreviousNext →
We use cookies on our website to give you the most relevant experience by remembering your preferences and repeat visits. By clicking “Accept All”, you consent to the use of ALL the cookies. However, you may visit "Cookie Settings" to provide a controlled consent.
Cookie SettingsAccept All
Manage consent